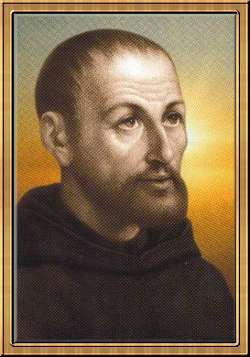 Nicolas was born October 21, 1621 in Amiens, his parents were wealthy merchants, who had five children he was the eldest. Nicolas was baptized at Saint-Germain December 17, 1621.

He was educated by the Jesuits, but at 19, he joined the Minims, founded by St. Francis of Paola. He took his vows in 1641 and was ordained priest in 1645.

From 1645 to 1655, he assumed the office of professor of theology and librarian at the convent in the Place Royale in Paris (now Place des Vosges).

But in 1655, his health deteriorating, Nicolas Barré was sent to Amiens, where he recovered, before leaving for Rouen.

There, from 1659 to 1675, he worked for the education of poor children, with a few girls who are organizing to be fully available to their educational mission. In 1662 opened a school in Sotteville-lčs-Rouen, and the Father Barre establishes a first community gathering women who had helped him in his efforts. These are the first Sisters of Providence of Rouen.

In 1675, he returned to Paris where he continued his foundation for popular schools and communities, such as Charitable Mistresses of the Holy Child Jesus, also known as the Ladies of Saint-Maur. He was the adviser of St. John Baptist de La Salle, to whom he enjoined to give up his property and live with poor school teachers to be successful as the first master charitable successful with girls. "