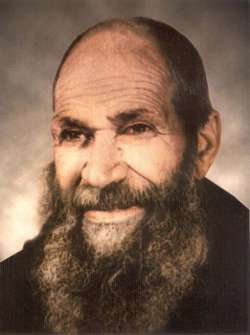 Brother Nicholas, known in the world as "John Medda" the son of John Messa Serra and of Priama Cogoni Zedda, was born at Gesturi in the province of Cagliari and Archdiocese of Oristano on 5 August 1882. His parents were of humble social condition, but of exemplary morality and deep piety. On the following day, the 6 August, the new baby, the sixth child, was baptised in the parish church of St Theresa of Avila, with the names of John, Angelo and Salvatore. On 2 June 1886, John received the sacrament of confirmation. Not long after, both his parents died. His eldest sister, who was married to a rich man of the village, then took care of him. Having finished his elementary school, he worked on the farm. He was a good boy with nothing special about him. However, when on 18 December 1896, John made his first Holy Communion, his life changed. He began to pray in an extraordinary manner, frequently receiving Holy Communion and mortifying himself. He safeguarded his spiritual life by keeping away from all worldly attractions, even those that would be acceptable. His love of nature taught him to have a nobility of soul, a fine sense of spiritual beauty, and a good sense of judgement. As well as this, he had excellent affective and moral qualities in his familiar relationships.

He had no desire to possess anything. He handed the administration of his properties to his brothers. Then he put himself at the service of his brother-in-law whom he greatly esteemed. He was content with just the food and a little nook to live in. The work, which he carried out scrupulously, did not stop him from going to Mass every day in the morning and to the Eucharistic devotions in the evening that were held in the parish. It seems that there was a desire for priesthood, but poverty was an insurmountable obstacle. He had a strong desire to live a religious vocation and after he was cured from a rheumatic illness, he took the opportunity to satisfy his desire to become a friar.

Accepting the Lord's call, he knocked at the door of the friary of the Capuchins of Cagliari in March 1911. He was 29 years old. Highly recommended by the Parish Priest, he was accepted as a tertiary oblate at this Friary dedicated to St Anthony. However, on the 30 October 1913, John Medda donned the Capuchin religious habit with the name of Nicholas. After novitiate, he made his first profession on 1 November 1914 and his solemn profession on the 16 February 1919. He was first assigned to the fraternity of the friary of Sassari as cook and from there he went to Oristano and then to Sanluri. His main work during these ten years was cooking.

At the Chapter, held at Cagliari on 25 January 1924, he was posted to the friary of Cagliari with the specific duty of questor in the city. From 1924 to 1958, in all seasons and every day, the people of Cagliari saw him going up and down the uneven and narrow streets of the Castello as well as those wider streets of Villanova. The people became increasingly impressed by the humble and modest behaviour of this little friar. With the passing of the years, he seemed more and more to become in his example like St. Ignatius of Laconi, who had lived in the same friary before him. For 34 years Brother Nicholas carried out his duty of questor as a true son of St. Francis, not only in the city of Cagliari, but also in the near-by villages of Campidano. In him, as he went about knocking on doors for alms the poverty of Christ showed forth to the people. He went along with his head bowed down and his eyes lowered, as if to hide a treasure; indeed, his two eyes were like two jewels shining with the simplicity and purity of his soul. As time went on, he did not have to ask people for anything; it was they who wanted to give him something. He simply made his rounds in silence and recollection.

He obtained without begging. He received without asking. It has been justly remarked that he was not a brother quester, but rather a brother quested - people looked to him for help. Not only common ordinary people, but also those high in society, both men and women, went to him asking him for a prayer, advice, or just to touch his habit or cord, or to slip in his hand an offering which he always accepted with "May God reward your charity!" a typically way of expressing thanks in Sardegna.

As soon as they saw him, mothers would send their little ones running towards him, or after him, to give him an offering and receive back from him a smile or a caress which was always considered as a blessing. Then it became customary to call him to the bedside of the sick in hospital or at home. Extraordinary cures took place. It was understood that the hand of God worked through this humble friar. The fame of his holiness and the power to work miracles spread everywhere. He became more the one who gave than the one who received. His life, the way he walked and presented himself, were for everyone an invitation to conversion, to prayer, and to the love and service of God and neighbour.

Br Nicholas was a man given to the silence noted in the Capuchin Constitutions Number 57. Through his continued silence, Br Nicholas evangelised and taught that "indeed only one thing is necessary" His sanctity was "silence." His silent prayer was his thanksgiving to those who gave to him; silence was his reproach to those who did not give to him when they could still do so; silence was his answer to useless questions or questions that could not be answered. It was only to recall the will of God that he broke his silence. His was a particular silence: a way to express himself, of being freed of the superfluous, a way to concentrate on what is essential without distractions. To Br Nicholas silence was a destination, not a departure point. It was a very great virtue not a fault.

A religious of constant loyalty and piety, Br Nicholas distinguished himself for his laudable zeal for souls and ardent charity for the needy he met during his daily walks as quester. He faced all difficulties with admirable patience and charity, acting with supernatural single-mindedness, courage and perseverance. The axis supporting his moral and spiritual personality was his profound spirit of prayer, which was typically expressed in his habitual behaviour of being a contemplative person, even in the middle of his daily chores. His entire behaviour was characterised by a living sense of the presence of God and by a constant union with the Lord. Every act and every word of his were transformed into a continuous, ardent prayer.

Through an authentic Gospel life lived in penance, Br Nicholas witnessed to the message of Christ through the streets of a distracted and problematic city and indicated to all the Gospel Way, which leads to holiness and true happiness.

After 45 years of religious life in humility, penance, charity, silence and constant prayer; exhausted under the burden of years, work and various infirmities; and having had surgery in a local clinic, Br Nicholas was aware of the seriousness of his sickness. After having received the last rites and being comforted by almost all his confreres in tears, he calmly expired in the provincial infirmary at exactly 3.00 p.m. on 8th June 1956 at 76 years of age.

The news of his death spread through the city like a lightening. It was given prominent space in the daily morning papers. From the early hours of the morning, people of all conditions and states of life, began to arrive, all anxious to see and touch his remains. It was then that God revealed to his brothers just what an apostolate Br Nicholas had been about over his many years. Because of the constant flow of people, the police had to be called and they could hardly control and keep in order the ever-increasing crowd. On the 10th of June the body, carried by the friars and other people, proceeded slowly towards the pubic cemetery of Bonaria. Some 60 thousand people obviously moved by his holy life and death accompanied it, and from wherever it passed flowers were showered on his procession.

However, it did not end there. With affection and gratitude his many devoted people, kept putting fresh flowers on this grave every day, thus transforming it into perennial flowerbed.

On the grounds of this continued, widespread and firm fame of holiness, the archbishop of Cagliari opened the cause of beatification and canonisation by establishing the Ordinary-Informative Process in 1966-1971. On 15 June 1977, the Decree of the Introduction of the Cause was published. During 1978-1982, the Process Recognition was established. The validity of both Processes was confirmed on 23 January 1986. On 25 June 1996, the Decree on the Virtues being Heroically practised was published. For the beatification of Br Nicholas, the Postulation presented to the competent Decaster an extraordinary case: the surviving of a newly-born baby terribly immature of only 23 weeks in the womb and of a very low weight, etc., The event happened in 1986 in the city of Cagliari. The Decree of the miracle was published on 21 December 1998 after all the demands of the law had been met.

The Holy Father has declared Brother Nicholas of Gesturi Blessed on 3 October 1999, to the joy of his Capuchin brothers and all the people who have showed such gratitude and devotion to him.