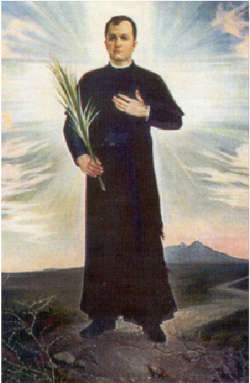 Fr. Miguel de la Mora was born in the town of Tecalitlan, Jalisco on June 19, 1874. During his childhood he learned of the farm work and farming and became a good rider. He entered the Seminary of Colima, as a teenager where he studied until his priestly ordination church in 1906.

When it ordered the suspension of public worship, Colima left to shelter in place origin. On the morning of August 7, 1927, in civilian clothes, accompanied by his elder brother and Cristiniano Regino Sandoval, left for the mountains where they were apprehended, bound and sent on foot to the head of Colima. Having considered the matter, General Flores immediately ordered the execution of the brothers de la Mora, in the stables of the barracks, on the dung of horses, while reciting the rosary.

Father Miguel de la Mora de la Mora walked in silence to where directed and as a proclamation of his faith and his love for Mary took out her rosary, she began to recite it, and with it in hand, was gunned down by bullets. It was noon August 7, 1927.