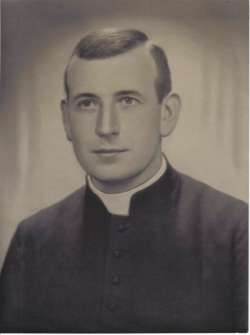 Blessed Michal (Michael) Kozal is one of the many children of Poland, who witnessed with their strong faith, the identity of Catholics, thousands dying in the notorious concentration camps and extermination Germans. Pope John Paul II beatified him in Warsaw on June 14, 1987, during one of his first pilgrimages to their common homeland of Poland.

Michael Kozal was born September 25, 1893 in the small village of Nowy Folwark, parish of Krotoszyn, nell'archidiocesi Poznan in Poland. His parents were called John Kozal and Marianna Placzek, grew up and was educated in a large family, which was poor but very religious. Having demonstrated exemplary elementary school and an innate fondness for everything that was sacred, on the advice of teachers on April 27, 1905, he was entered in the gymnasium Krotoszyn, which he attended for nine years as always first class.

During the school he knew the clandestine Catholic organization "Thomas Zen Association," which opposed the policy of germanization in schools and which in recent years ginnasiali became president.

After Graduating in 1914, Michael Kozal enrolled in the seminar Leonium Poznan and his studies were affected by the outbreak of the First World War ended so ended in Gniezno, then he was ordained a priets in the cathedral on February 23, 1918.

In the intervening years he had various pastoral assignments in some towns, whose names are so difficult for us to speak and read, being appreciated for his zeal and dedication, while completing his theological studies with excellent results. Edmondo Dalbor the cardinal archbishop of Gniezno, September 29, 1922 ,appointed him prefect of the Catholic school of humanities female Bydgoszcz in 1927 and named him the spiritual father of the Major Seminary of Gniezno. The priest and his spiritual guide, was so successful that on September 25, 1929 he was appointed rector of the seminary, despite the fact that among all the teachers, he was the only one who did not have an academic degree.

So he spent a decade, marked by his prudent and exemplary leadership to the students. Pope Pius XII on June 12, 1939 appointed him auxiliary bishop of Wloclawek with the title of bishop holds Lappa, he was consecrated in the Cathedral of the city on August 13, 1939.

A few days later on September 1, the Nazi troops invaded Poland and burst into the Second World War, the horrors and devastation of which were brought to the whole world. Bishop Kozal became a point of reference and comfort to the frightened people of Wloclawek and, despite repeated invitations of the Polish authorities to move away from the city, he strongly wanted to remain with his people and administer the diocese after September 6, the Bishop Mgr. Radonski.

His pastoral service throughout lasted just 22 months; the Germans came into the city September 14, and began a systematic dismantling of the Church, the Catholic publications were suppressed, buildings belonging to churches and religious institutions were seized, the clergy arrested. Faced with the terror unleashed by the Nazis, the bishop Kozal protested vigorously but in vain with the authorities of occupation, the abuse made to the Church. This resulted in an order to report to the Gestapo, among other things that were asked were sermons in German, but he agreed and not providing for his next stop, was preparing a case to the indispensable.

In fact, November 7, 1939, he was arrested along with other priests and imprisoned in the jail of the city, which was also served for solitary confinement and torture. On January 16, 1940 he was transferred with other seminarians and priests at the Salesian a Lad under house arrest, from where he could secretly have contact with the diocese and reorganize the seminary. From his window, he could see the passage of the crowds of the deportees, so there were no illusions about his fate, he even decided to offer his life to God for the salvation of the Church and of his beloved Poland.

While other clerics were deported to several concentration camps, Msgr. Michael Kozal Lad was left with seven priests and a deacon, but despite the efforts of the Holy See to save them, on April 3, 1941they, too, were deported to the concentration camp of Inowroclaw, where the bishop reported injuries to the legs and all left ear, for the torture inflicted on them by the Nazis. On April 25 of 1941, they were transferred to the notorious camp Dachau, Bishop Kozal was assigned the number 24544, the torture suffered daily, especially Catholic priests, it said an epidemic of typhus, which hit a huge number of deported.

The testimony of his cousin was crucial, because he heard from the group of doctors, the phrase: "Now is the easiest way to eternity." It is not known what poison has been injected, and his body on 30 January 1943 was incinerated in the crematorium at Dachau. In the cathedral of Wloclawek was as stone monument was erected in 1954, commemorating the martyrdom of Bishop Michael Kozal and 220 other priests of the diocese, who died in Dachau. The day of the liturgical celebration of Blessed Michael Kozal is January 26.

Biography Provided By: The Black Cordelias