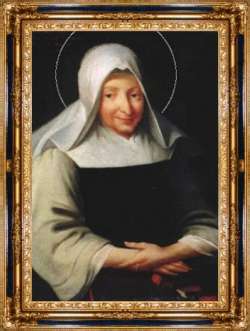 Mary Poussepin was born in the diocese of Versailles in 1653. Her well to do family had a reputation for both sanctity and sound business. She was a gay hearted and generous girl, well liked by all her friends. Her gifts of mind and judgment were far beyond her years. She might have entered religion earlier, but the illness of her mother required her constant care. When Mary was twenty two, her mother died, and the girl took over the management of the house. She had the consoling thought that as soon as the shock of her mother's death had worn off, she would approach her father on the question of becoming a cloistered nun. In the meantime, she busied herself with the care of her young brother, and all the pious works she could do in a day. It soon became apparent that her plans for contemplative life would have to be revised, for her father fell ill, and she was needed to care for him.

Since her home was situated conveniently between the hospital of the Sisters of Charity and the church where the Dominican Third Order regularly met, Mary Poussepin soon found herself involved in the charities of the one and the spiritual life of the other. She became a Tertiary, and she placed herself under the guidance of a Dominican confessor, who was to watch over her for nearly half a century. Working with the Sisters of Charity, she was constantly aware of the needs of the sick and the unfortunate, and she began to dream of a Dominican community in which these works could become a part of the apostolate. Not until after her father's death could she set about making this dream a reality, but, from the records of those intervening years, it is clear that she lost neither time nor opportunity in either charitable works or spirituality.

Mary Poussepin was thirty years old when at last she was free to follow her heart and begin the institute that she had so long dreamed of. It is a little hard for us to see why she should have had such difficulty in making the ideas attractive to higher authorities, for in America we have a proud tradition of Dominican sisters doing the various works of charity which she espoused. At that time and place, however, it was evidently a novelty for Dominican sisters to care for the orphans or the poor, the insane or the wayward. Reading between the lines, moreover, one is quite certain that the bishop with whom most of her negotiations had to be made was a man who heartily disliked Dominicans. It is impossible now to know with certainty the reasons for the things that occurred. We can only record the facts, and presume that the reasons at the time were ample.

Mary Poussepin began her institute of the Dominican Sisters of Charity in Angerville. She started with high hopes and one companion, and postulants soon came to fill the ranks. The sisters wore the colors of the Order quite probably they were not permitted the same form of religious habit as that worn by the regular communities of Dominicans. They had a Dominican director, and everyone agrees the Dominican spirit. But when it came to obtaining affiliation with the Order, they were blocked by the bishop's refusal and probably in view of this by the reluctance of the Order to force their claims. The people of the town called the sisters "Jacobines," an allusion to the Dominican fathers; but, for nearly two hundred years, that was as near as they came to regular affiliation.

After several false starts, which necessitated moving and beginning again, the community prospered. It cared for schools, hospitals, kindergartens, and homes for the aged, the insane, and the delinquent. Their houses spread over France and were recognized, both civilly and ecclesiastically, as a religious institute with all the rights and privileges except the one for which the foundress had struggled for a lifetime: official acceptance into the . Dominican family. At the age of ninety, as she lay on her deathbed, her hopes seemed ruined forever when she received word that all affiliations with the Order even the solemnizing of the feast of St. Dominic must be abandoned if she did not wish the rights of her institute taken away completely. All that she had striven to establish had come to nothing. Accepting the will of God, she commanded her sisters to remain spiritually close to the great Order she loved, and she died with no assurance that they would ever realize her desire.

Half a century after the death of Mary Poussepin, the French Revolution broke upon the country. Dispersed, and wearing secular clothes, hiding and working in dangerous places, the sisters took advantage of the occasion to resume the first habit and all the customs from the primitive days. A few years later, more Dominican privileges were granted, and the sisters pressed the question of affiliation. Not until 1897, two full centuries after the foundress first began her project, was her community allowed to use the full tide "Dominican Sisters of Charity of the Presentation of the Most Blessed Virgin Mary."

Sisters of Mother Poussepin's foundation have been in Near East missions, Mesopotamia, and Kurdistan, as well as France, Spain, and Italy, for the past century. They also have missions in South America, and they have been in the United States, in Fall River, Massachusetts, since 1906.

Biography Provided By: Order of Preachers