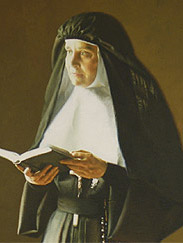 Maria Rafols was born on 5 November 1781 in Vilafranca del Penedes Spain, to a simple hard-working family. Because of her talent, she was sent to a boarding school in Barcelona, where she completed her formation while maintaining a life of solitude, prayer and piety.

She then joined a group of 12 young women under the direction of Fr Juan Bonal, who administered Our Lady of Grace Hospital in Zaragoza. The small community formed an apostolic association dedicated to serving the most helpless: the sick, the mentally ill, abandoned children and all types of disabled people.

At the age of 23 she was appointed superior of the group, a task requiring heroic effort, since she often had to confront a hostile atmosphere created by some of the hospital employees. During the Napoleonic wars she laboured in the bombed ruins, endangering her life to save the sick and the children. She even ventured into the enemy camp to plead with the French general for help with the sick and wounded.

She struggled tirelessly for the approval of her small community. Finally in 1825 they took their first public vows. The victim of calumny, she was imprisoned during the Carlist War, but later released; she spent her remaining years at her Foundling Home. She died on 30 August 1853 at the age of 72.