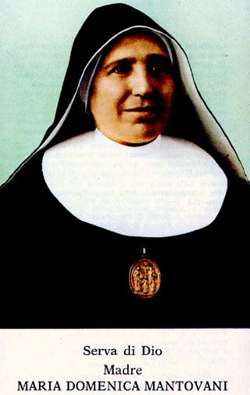 Born on 12 November 1862 in Castelletto di Brenzone, Italy, Maria Domenica Mantovani was the first of Giovanni and Prudenza Zamperini's four children. She grew up in this small farming village and attended elementary school up to the third grade. Her intelligence, strong will and good sense made up for her incomplete education. She learned a healthy, balanced piety from her parents and at an early age was drawn to prayer and to helping others.

In 1877, when Maria Domenica was 15 years old, Fr Giuseppe Nascimbeni arrived in Castelletto as curate of the parish. As Maria's spiritual director he encouraged the young girl to play an active role in the parish by visiting the sick and teaching catechism. Fr Nascimbeni, who desired to enter into the lives of the townspeople to lead them to God, found Maria Domenica to be a zealous "collaborator". Her life of prayer and her love of God and others continued to expand under the care and direction of this austere, holy priest (beatified 17 April 1988).

On 8 December 1886, before a statue of Mary Immaculate, Maria made a private vow of perpetual virginity. She felt that God was calling her to be consecrated to Him. This profound love for the Virgin Mary was characteristic of Maria Domenica, who allowed herself to be guided by Mary and to follow Our Lady's motherly example in caring for souls.

In 1892, Fr Nascimbeni founded the Congregation of the Little Sisters of the Holy Family with four women, to promote parish life and any activity that would help the spiritual and material well-being of people in need. Maria Domenica assisted him in the foundation and was made Cofoundress and Superior General. She was given the name "Mother Maria of the Immaculate", and to the sisters and townspeople she was simply known as "Mother".

She was faithful in assimilating and putting into practice the formation she had received from Fr Nascimbeni during the "preparatory years", carefully passing it on to the sisters and novices who were entrusted to her care. Mother Maria's life of prayer was exemplary; she was noted for her complete trust in Mary Immaculate and always sought guidance for the direction of the congregation and the direction of the souls of her "daughters" at Our Lady's feet.

Mother Maria felt her own "littleness" in front of the greatness of what God was calling her to do, especially since she, after Fr Nascimbeni, became a reference point and a model for the townspeople who came to her for counsel and comfort. With deep faith, however, she would say: "The Holy Family, for the great and mysterious project [that God is calling it to], has chosen me as its Cofoundress..., knowing that the Lord uses the least qualified, little, unknown instruments to do great works.... I am tranquil and convinced that the Institute, the work of God, will be provided for and guided by Him".

The sisters were put under the direct care of Mother Maria in their spiritual and apostolic formation. Their charism was one of service to the poor and needy of the villages, achieved through the religious instruction of parishioners, assisting the sick and elderly in ther homes and working with children in nursery schools.

Mother Maria constantly transmitted to all around her a feeling of great peace and was known for her goodness, humility, and also firmness when needed. In 1922 Fr Nascimbeni died, and Mother Maria continued to guide the growing religious family with constancy, simplicity and dedication. She herself died on 2 February 1934 in Castelletto di Brenzone.

Today the Little Sisters of the Holy Family can be found in Italy, Switzerland, Albania, Africa, Argentina, Brazil, Uruguay and Paraguay. They are dedicated to serving children and youth, families, priests, the elderly and the disabled in parishes.