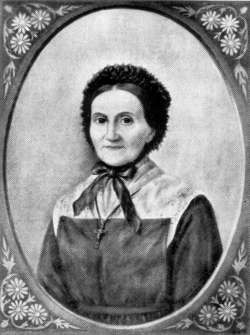 Marguerite Bays was born the daughter of simple, pious farmers on 8 September 1815 in La Pierraz, Siviriez, near Fribourg, Switzerland. She was educated locally and worked as a dressmaker.

She spent all her life in her own neighbourhood. In her parish she was an exemplary committed lay person, especially dedicated to children and young girls. She also visited the sick and the dying with tireless ardour. She was a true friend of the poor, whom she called "God's favourites". She introduced missionary activities into the parish and contributed to founding the Catholic press at the time of the Kulturkampf.

She developed intestinal cancer at the age of 35 and asked Our Lady to intercede with her Son to exchange her suffering for the kind of pain that would enable her to share more directly in the Passion of Our Lord. She was miraculously cured on 8 December 1854 at the moment when Pius IX pronounced the dogma of the Immaculate Conception. Instead, she had to bear a "mysterious affliction" which immobilized her in ecstasy every Friday when, physically and spiritually, she relived the phases of Jesus' passion from Gethesmane to Calvary. She also received the stigmata, like St Francis, which she did her best to hide.

Marguerite Bays put the greatest trust in prayer, the focus of her life, to which she had been inclined since childhood. She had deep love for Our Lady, whom she venerated by frequently reciting the Rosary and visiting her shrines. She also had immense love for Jesus in the Eucharist, before which she spent long hours in adoration. She lived constantly in God's presence. Thus she suffered from the sight of the weak faith she saw around her and prayed that it would be strengthened. Her focus on the eternal prevented her from being distracted by the pleasures of this world or by personal advantage of any kind. God was her greatest love. She deplored human indifference to him and insistently demanded: "What can we do to love God more?". Her constant concern to be centred on God made her profoundly humble. She felt she was the lowliest of creatures and a great sinner, and fought the self-love that dampened her ardour. She fled attention and always sought to hide the great marks of favour she had been granted.

Marguerite identified increasingly with the suffering of Jesus on the Cross. Happy to be called to follow him, she showed no sign of suffering and on the contrary "could be heard to utter words of adoration and submission to God's holy will". She died at 3:00 p.m. on Friday, 27 June 1879, absorbed in her love for the crucified Lord.