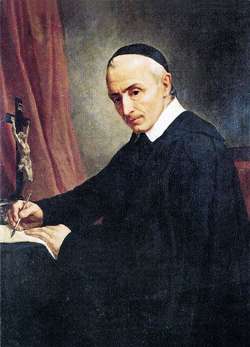 Marcantonio was born in Mondově, on 22 May 1801, of the distinguished Durando family, whose house overlooked the Main Square, near the Cathedral and the Church of the Mission. In contrast to his mother, a very pious person, who instilled religiosity and faith in the heart of her eight children, his father had liberal ideas and was of lay and agnostic tendencies. In particular, two sons absorbed his convictions, becoming involved in the events of the Italian Revival (Risorgimento). They occupied high positions in political and military life. Giacomo was Foreign Affairs Minister in the Rattazzi government of 1862. In 1848, Giovanni, a general and head of the pontifical troops, disobeyed the orders of Pius IX by taking the papal troops beyond the Po River in order to bar the Austrians' way. Having reentered the army of Piedmont, he participated together with Carlo Alberto in the Battle of Novara, the expedition in Crimea and the war of independence.

Marcantonio took more after his mother. At the age of 15 he manifested a desire to go to China as a missionary. He entered the Congregation of the Mission, which was being rebuilt in Italy at that time. At the age of 18, he made his perpetual vows and on 12 June 1824 was ordained a priest. He remained in Casale Monferrato for five years then, from 1829 until his death, in the house of Turin, of which he became superior two years after his arrival. Instead of China, his destination was the popular missions, into which he infused the missionary passion of announcing Christ. He supported and diffused the newly-born work of the Propagation of the Faith, instituted in Lyon in 1822; and in the height of his responsibility as Visitor, in 1855, he inaugurated the Brignole-Sale School for the foreign missions, with the purpose of forming priests for the missions ad gentes.

In the early years of his priesthood, the missionary tension was absorbed by the missions, which he preached in many towns of Piedmont. Avoiding both the extremes of laxity and the rigorism of Jansenism, Fr. Durando preached the mercy of God, attracting the populations to conversion: "The people--according to a commentator on the mission of Bra--thronged to hear him and were so silent and attentive they listened to him as if they were a single man." During these missions, he did not limit himself to preaching, but wherever he found grave situations of poverty, in agreement with the confreres, he intervened in concrete ways. For example, at Locana, he had "the entire legacy of the mission, consisting of 700 lire, converted into corn flour for the poor of the country," thus putting into effect the teaching of St. Vincent to intervene spiritually and corporally in favor of the poor.

Love for the Poor

Concern for the poor was the other face of his missionary passion. Shortly after he was elected superior, he saw the usefulness of introducing into northern Italy the Daughters of Charity, born of the charitable charism of St. Vincent de Paul and St. Louise de Marillac. The sisters, after having been dispersed during the French Revolution, had just begun to reorganize. The apparitions of the Miraculous Medal in 1830 to St. Catherine Labouré, a novice among the Daughters of Charity, can be considered the origin of the new flowering which the community was experiencing. It was Fr. Durando's astuteness to recognize this. He wanted them in Piedmont. King Carlo Alberto welcomed them in 1833 and they began by taking responsibility for various hospitals, both the military ones in Turin and Genoa, and the civil ones in Carignano, Castellamonte and Turin. In 1855, he had the courage to send them to the front during the Crimean War in order to help the wounded. At the same time, he spread the Marian Association of the Miraculous Medal among the youth, and from that came new vocations: in a short period of ten years 20 foundations were established and 260 sisters joined the community. The number of vocations was overflowing to such an extent that in 1837 Carlo Alberto placed at their disposal the convent of St. Salvario in Turin. With the increase of sisters, Fr. Durando provided the city of Turin with a network of charity centers, called Misericordie, from which the sisters with the Ladies of Charity set off to serve the poor in their homes and to help them in other ways. Around the Misericordie various works were formed, like the first nursery schools for poor children, workplaces for young girls, orphanages. Because of their works of assistance among the sick and the poor, together with taking on various educational works, the Daughters of Charity were precious collaborators in the development of social Catholicism in Italy.

Man of administration and Director of Conscience

In 1837, at only 36 years of age, he was appointed Visitor (or major superior) of the Province of North Italy of the Vincentian Fathers, a position which he occupied for 43 uninterrupted years, until his death. Consequently, he had to reduce his participation in the missions. His time was absorbed in organizing the Congregation of the Vincentian missionaries and preaching spiritual retreats to priests and clerics of the Turin Diocese. The quality of his spiritual direction attracted the attention even of new foundations, which were being established in Turin. The Archbishop, Msgr. Fransoni, entrusted to him the direction of the Sisters of St. Joseph, who had just arrived in Italy. He contributed to the writing of the rules of the Sisters of St. Ann. He became the spiritual guide of the Poor Clares in the new St. Claire monastery. The Marchioness of Barolo, who had founded a monastery for the recovery of lost girls, the Repentant Sisters of St. Magdalene, wanted him as adviser for the constitution of the rules and director of the work. But the work that distinguished him was the foundation of the Nazarene Sisters.

At the School of Jesus Crucified, Founder of the Nazarene Sisters

As happens with works of God, without having willed it, on 21 November 1865, the Feast of the Presentation of Mary, Fr. Durando was able to entrust to the Servant of God, Luigia Borgiotti, the first postulants of the new Company of the Passion of Jesus the Nazorean. They were young girls who turned to him because, although desiring to consecrate themselves to God, they were lacking some of the canonical requisites for entering religious communities. He gave them the task of serving the sick as suffering members of Christ crucified, going to assist them in their homes, day and night. The work was innovative and original, so much so that a canon of the cathedral exclaimed: "If Fr. Durando were to come to confess to me, I could not in conscience absolve him." And yet, thanks to the charity of those sisters, who knew how to accompany the dying with gentleness, discretion and faith, because they contemplated in those suffering, the suffering of the Lord, various excellent conversions occurred, such as those of Guido Gozzano, Felice Raccagni, Sofia Graf, Annie Vivanti.

Father Durando died on 10 December 1880; he was 79 years old. His mortal remains were buried, significantly, in that little sanctuary of the Passion, annexed to the Church of the Visitation in Turin, where the community of Nazarene Sisters was nourished on devotion to the passion of the Lord in order to place itself, in a missionary spirit, at the service of the suffering.

The cause of beatification, which began in Turin in 1928 and continued in Rome with the apostolic process in 1940, concluded in 2001 with the recognition of the miracle obtained through his intercession.