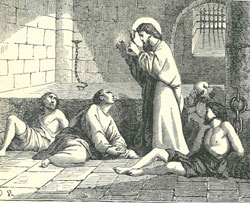 St. Marius Abbot January 27 A.D. 555     Dynamius, patrician of the Gauls who is mentioned by St. Gregory of Tours, (l. 6, c. 11,) and who was for some time steward of the patrimony of the Roman church in Gaul, in the time of St. Gregory the Great, as appears by a letter of that pope to him, (in which he mentions that he sent him in a reliquary some of the filings of the chains of St. Peter, and of the gridiron of St. Laurence,) was the author of the lives of St. Marius and of St. Maximus of Ries. From the fragments of the former in Bollandus, we learn that he was born at Orleans, became a monk, and after some time was chosen abbot at La-Val-Benois, in the diocese of Sisteron, in the reign of Gondebald, king of Burgundy, who died in 509. St. Marius made a pilgrimage to St. Martin's, at Tours, and another to the tomb of St. Dionysius, near Paris, where, falling sick, he dreamed that he was restored to health by an apparition of St. Dionysius, and awaking, found himself perfectly recovered. St. Marius, according to a custom received in many monasteries before the rule of St. Bennet, in imitation of the retreat of our divine Redeemer, made it a rule to live a recluse in a forest during the forty days of Lent. In one of these retreats, he foresaw, in a vision, the desolation which barbarians would soon after spread in Italy, and the destruction of his own monastery, which he foretold before his death, in 555. The abbey of La-Val-Benois *being demolished, the body of the saint was translated to Forcalquier, where it is kept with honor in a famous collegiate church which bears his name, and takes the title of Concathedral with Sisteron. St. Marius is called in French St. May, or St. Mary, in Spain, St. Mere, and St. Maire, and in some places, by mistake, St. Maurus. See fragments of his life compiled by Dynamius, extant in Bollandus, with ten preliminary observations.