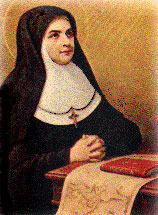 Father Michael, pastor of one of the poorer suburbs of Madrid, was aware of the problem of the poor and abandoned sick who often could not afford hospitalization. So he began an order which would provide nurses to go to the homes of the sick whether or not they could pay. Because of his special devotion to Our Lady of the Seven Sorrows, he wanted to begin with seven "servants" of Mary. The seventh applicant was little Vibiana Torres. Vibiana was born December 2, 1826, the second of five children of a dairyman. She loved to gather children of the neighborhood and have childish processions in honor of Our Lady. Later she began to visit the sick of the neighborhood and perform small penances for the souls of others. In spite of her kindness and outgoing nature, Vibiana secretly longed for the contemplative life. She applied for admittance to the Dominicans as a lay sister, but she would have to wait for a vacancy. As she realized that chances for an opening with the Dominicans were slim, she requested an interview with Father Michael. On August 15, 1851, the twenty-four year old Vibiana and six others took the three religious vows of poverty, chastity and obedience, received the habit of the new congregation, and changed their names. Vibiana became Sister Maria Soledad. Many problems beset the young Congregation. The first superior left the Congregation and tried to undo all its works. The sisters were very poor and hardly had enough to eat. In 1856, Father Michael appointed Sister Soledad superior general of the community. Through many hardships, she persevered in charity, humility, and in her wise guidance. She spent many hours praying for more sisters. Mother Soledad had the joy of living to see her congregation given full papal approval in 1876. Mother Soledad contracted pneumonia in 1887. She died quietly at the motherhouse after receiving the Last Sacraments at the age of sixty. She was originally buried in the sisters' plot at the cemetery, but on January 18, 1893, her remains were exhumed and transferred to the motherhouse. Her body was intact and it exuded a bloody liquid, and a sweet odor was noticed by all present. A few years later, only the bones remained. Mother Soledad was beatified in 1950 by Pope Pius XII, and canonized by Pope Paul VI in 1970. Her feastday is October 11.