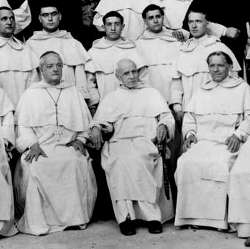 Hyacinthe-Marie Cormier, O.P. (born Louis Stanislas Henri Cormier; December 8, 1832 - December 17, 1916) was a French Roman Catholic priest and the seventy-sixth Master General of the Dominican Order, serving in that capacity from 1904 until 1916. He was beatified by Pope John Paul II on November 20, 1994.