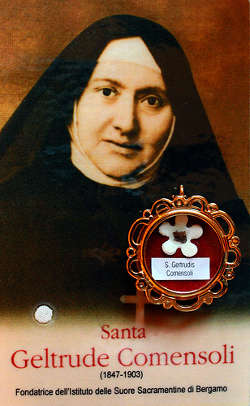 Gertrude Comensoli, born Catherine, was an Italian who was canonized in 2009 by Pope Benedict XVI. Saint Gertrude was born in Bienne, Valcamonica, then under the Kingdom of Lombardy-Venetia.

Catherine grew up in a family with ten brothers and sisters, of which only three females survived: Bartolomea, Cristina and Catherine precisely.

She received her First Communion in 1867 and joined the Society of St. Angela Merici.

On December 15, 1882, decided to found, with Francesco Spinelli, the Institute of the Sisters Adorers of the Blessed Sacrament (which was also the origin of the Sisters Sacramentine) and taking the name Sister Gertrude.

On 1 November 1894, opened a house of nuns in Castelnuovo Bocca d'Adda and in the same year in the province of Lodi.