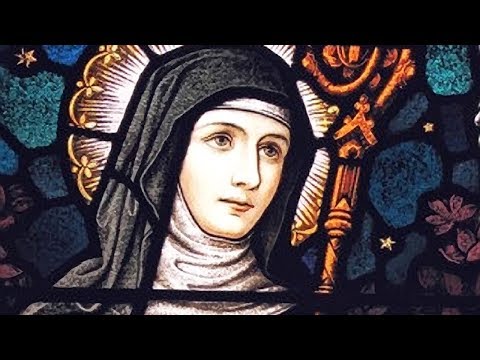 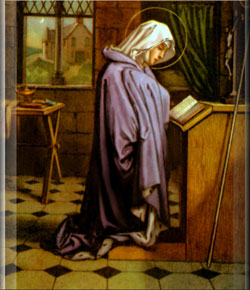 St. Gertrude the Great, or St. Gertrude of Helfta, was born on January 6, 1256 in Germany. She eventually chose to follow the Lord by pursuing a vocation as a Benedictine Nun. Her deep relationship with the Lord in prayer led to her being hailed as a mystic. She was also regarded as a great theologian.

Although little is known about Gertrude's childhood, it is widely accepted that at just four-years-old, she was enrolled in the Cistercian monastery school of Helfta in Saxony, under the governance of Abbess Gertrude of Hackerborn.

The Cistercian movement was an effort to bring the Benedictine religious community back to a stricter and more faithful adherence to the original "Rule" or way of life encouraged by St Benedict. Some sources speculate that Gertrude's parents offered their child as an oblate, a lay person especially dedicated to God or to God's service, while others believe she may have entered the monastery school as an orphan.

St. Mechtilde, the younger sister of the Abbess Gertrude, took care of young Gertrude. Gertrude and Mechtilde had a strong bond that only grew deeper with time, allowing Mechtilde to have a great influence over Gertrude.

Gertrude, known for being charming and able to win people over, entered the Benedictine Order at Helfta and became a nun. She devoted herself to her studies, and received an education in many different subjects. Gertrude was both fluent in Latin and very familiar with scripture and works from the Fathers of the Church, including Augustine.

In 1281, 25-year-old Gertrude experienced her first series of visions that would continue until the day she passed away. Her visions altered her life and she saw this moment as her new birth. Her priorities turned away from secular teachings and focuses more on studying Scripture and theology. Her life became full with this awakening and she was an enthusiastic student, writing for the spiritual benefit of others.

Gertrude once had a vision on the feast of John the Evangelist, described in Gertrude's writings. As she rested her head near Jesus' wound on his side, she could hear the beating of his heart. She asked St. John if he, too, felt the beating of Jesus' Divine Heart on the night of the Last Supper. He told her he was saving this revelation for a time when the world needed it to rekindle its love.

She went on to become one of the great mystics of the 13th century. Along with St. Mechtilde, she practiced what is known as "nuptial mysticism," seeing herself as the bride of Christ. She embraced charity for both rich and poor, she was a simple woman with a deep solidarity with those not yet ready for the beatific vision, who are still being purified in the state of repose known as purgatory.

Gertrude assisted at the deathbeds and mourned for the loss of both Abbess Gertrude of Hackeborn in 1291 and her dearly loved St. Mechtilde in 1298. Gertrude's health began to deteriorate, but she continued to only show her love for the Lord.

"Until the age of 25, I was a blind and insane woman... but you, Jesus, deigned to grant me the priceless familiarity of your friendship by opening to me in every way that most noble casket of your divinity, which is your divine Heart, and offering me in great abundance all your treasures contained in it".

On November 17, 1301, Gertrude passed away a virgin and joined her Bridegroom forever.

Throughout her life, Gertrude produced numerous writings, although only a few still exists today. One of her longest surviving works is Legatus Memorialis Abundantiae Divinae Pietatis (The Herald of Divine Love). Her other standing works include, her collection of Spiritual Exercises and Preces Gertrudianae (Gertrudian Prayers).

The Herald of Divine Love is composed of five different books. Book two is the core of the work, and was written solely by Gertrude. It is a notable piece of writing, because it includes detailed descriptions of Gertrude's visions and a veneration of Christ's heart. The other four books are believed to have been composed by other nuns.

Although Gertrude was never formally canonized, Rome approved a liturgical office of prayer and readings in her honor. To separate her from Abbess Gertrude of Hackeborn, Pope Benedict XIV gave her the title, "the Great," making her the only woman saint to be called, "the Great."

St. Gertrude the Great is the Patroness of the West Indies and she is often invoked for souls in purgatory. Her feast day is celebrated on November 16. 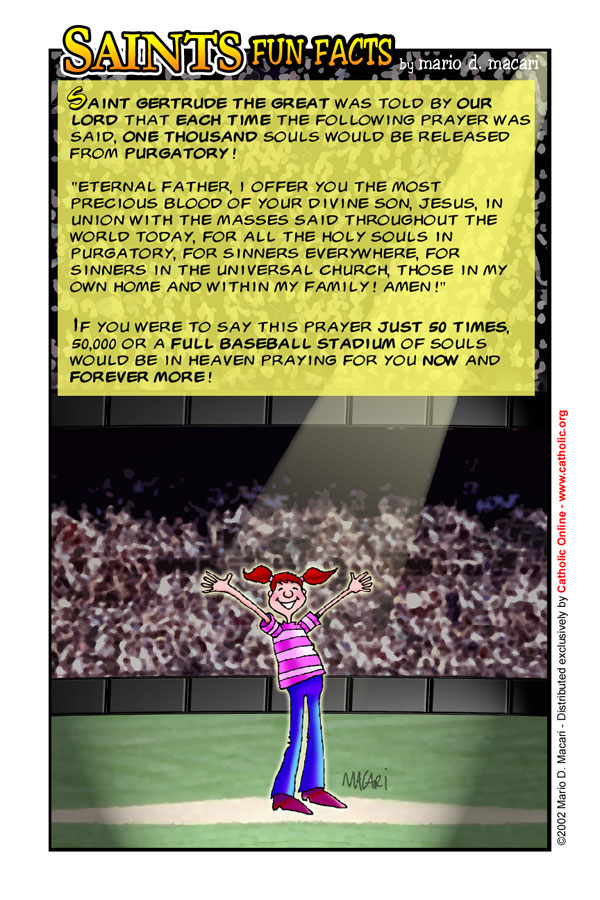