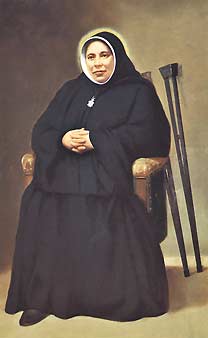 Genoveva Torres Morales, Foundress of the Congregation of the Sacred Heart of Jesus and the Holy Angels (The Angélicas)

Genoveva Torres Morales was born on 3 January 1870 in Almenara, Castille, Spain, the youngest of six children. By the age of eight, both her parents and four of her siblings had died, leaving Genoveva to care for the home and her brother, José. Although he treated her with respect, José was very demanding and taciturn. Being deprived of affection and companionship from her early years, Genoveva became accustomed to solitude.

When she was 10, she took a special interest in reading spiritual books. Through this pursuit she came to understand that true happiness is doing God's will, and it was for this reason that each one of us is created. This became her rule of life.

At the age of 13, Genoveva's left leg had to be amputated in order to stop the gangrene that was spreading there. The amputation was done in her home, and since the anaesthesia was not sufficient, the pain was excruciating. Throughout her life her leg caused her pain and sickness, and she was forced to use crutches.

From 1885 to 1894 she lived at the Mercy Home run by the Carmelites of Charity. In the nine years she lived with the sisters and with other children, the young Genoveva deepened her life of piety and perfected her sewing skills. It was also in these years that Fr Carlos Ferrís, a diocesan priest and future Jesuit and founder of a leprosarium in Fontilles, would guide the "beginnings" of her spiritual and apostolic life.

God also gave Genoveva the gift of "spiritual liberty", and this was something she would endeavour to practise throughout her life. Reflecting on this period at the Mercy Home, she later would write: "I loved freedom of heart very much, and worked and am working to achieve it fully.... It does the soul so much good that every effort is nothing compared with this free condition of the heart".

Genoveva intended to join the Carmelites of Charity, but it seems she was not accepted due to her physical condition. She longed to be consecrated to God and, being of a decided and resolute nature, she continued to be open to his guidance.

In 1894 Genoveva left the Carmelites of Charity's home and went to live briefly with two women who supported themselves by their own work. Together they "shared" the solitude and poverty.

In 1911, Canon Barbarrós suggested that Genoveva begin a new religious community, pointing out that there were many poor women who could not afford to live on their own and thus suffered much hardship. For years, Genoveva had thought of starting a religious congregation that would be solely concerned with meeting the needs of such women, since she knew of no one engaged in this work.

With the help of Canon Barbarrós and Fr Martín Sánchez, S.J., the first community was established in Valencia. Shortly thereafter, other women arrived, wanting to share the same apostolic and spiritual life. It was not long before more communities were established in other parts of Spain, despite many problems and obstacles.

A constant source of suffering for Mother Genoveva was her involvement in external activity and the new foundations. She desired to return to her characteristic interior solitude and remain alone with the Lord, but she accepted her calling as God's will and did not let her physical or interior suffering stop her.

She would say: "Even if I must suffer greatly, thanks be to God's mercy, I will not lack courage".

She was known for her kindness and openness to all, and for her good sense of humour - she would even joke about her physical ailments.

In 1953, the Congregation of the Sacred Heart of Jesus and the Holy Angels received Pontifical approval. Mother Genoveva died on 5 January 1956. She was beatified by Pope John Paul II on 29 January 1995.