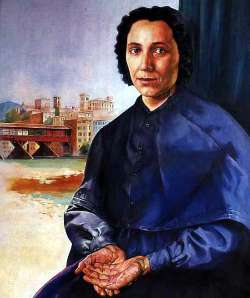 Gaetana Sterni lived her whole life in Bassano del Grappa, an ancient and cheerful city in the province of Vicenza (Italy). She arrived with her family, at 8 years of age, from the nearby Cassola, where she was born on the 26th June 1827. Her father Giovanni Battista Sterni, worked as administrator for the country property of the Mora, noble Venetians, and lived comfortably in the Mora habitat with his wife Giovanna Chiuppani and their six children. In 1835 he moved with his family to Bassano. However, a series of unfortunate episodes were to change drastically the conditions for the family of Gaetana. At 18 years of age her elder sister, Margherita, died, and shortly after, following a grave illness, her father too died. In the meantime, her brother Francesco, with the aim of becoming an actor left the home, and thus the family, in a dire financial situation.

These events left their mark on Gaetana, who was forced to grow up before her time, having to share with her mother the many problems of day to day life. Being blessed with a good intelligence she showed herself to be sensitive and mature, but also full of life " desiring to love and be loved".

Her religious education was solid and guided by the teachings of her mother, her prayers, and her frequenting the church. She soon aquired in her environment, respect and appreciation for her radiant character, full of good sense and for her strong feminility. "Her delicate features and rare beauty", and her fascinating presence soon attracted a young entrepreneur, Liberale Conte, a widower with three children who asked her to marry him.

After a deep analysis of her feelings and the responsibilities that she would have to assume, and overcoming the opposition of her tutor, Gaetana accepted Liberale's proposal. The young bride, who still hadn't reached her sixteenth birthday, entered into her new home filling it with her vitality, giving back to her husband joy and serenity and loving his three children as if they were her own. When Gaetana discovered that she was expecting his child, the happiness of the couple was complete.

While she was praying, Gaetana was shaken by a premonition of the imminent death of her husband, and felt as though she would "die of a broken heart" at the thought of losing he who was "more precious than life", however deep inside she felt a strength that would keep her from despair and lead her to have faith in God with all her heart. Unfortunately her premonition came true, and Liberale, in the height of youth and health, after a brief illness, died. The young bride now found herself in terrible anguish for the loss of her husband, whom she loved more than herself, for the children who once again found themselves to be orphans, and for her unborn child who would never know it's own father. She was completely in pieces from the pain, but when she started coming back to her senses, she remembered the premonition that she had had and what she had felt. She once again found faith in the Lord, entrusting her life to Him. In Him she found the strength to live, to take care of the three children, and to complete her pregnancy. Unfortunately even Gaetana's child died just a few days after it's birth. Here began years of bitter widowhood. The family of her husband did not appreciate the strong links that bound Gaetana to the orphans, and many misunderstandings, suspicions and false rumors arose. Eventually she was seperated from the children and distanced from the house. At nineteen years of age she returned to the home of her mother. Inspite of this ordeal, and not thinking of herself, she helped the children to accept the difficult seperation. Approachable but strong, she defended the rights of the children, forgave freely and obtained the full reconciliation and serenity of the two families. The suffering didn't make her bitter, and her natural sensitivity became aware, giving her a capacity for compassion and solidarity.

She never thought of entering into a religious order, and looking into her future, she prayed that the Lord would help her to understand who was the husband that God had destined to be hers. But it was through her prayers that she began to perceive clearly that God wanted to be "the only husband for her soul", and Gaetana was stunned. She confronted her holy confessor who confirmed that it was an authentic call to God. Consequently she asked to enter the convent of the Canosians of Bassano and was accepted as a postulate. For five months she lived happily in the community, but once again in her prayers she had a premonition that prepared her for the death of her mother, which then happened within the arc of a few days. Consequently she was forced to leave the convent to assume the responsibility of looking after her younger brothers. For years she faced difficulties, family illness, misfortunes and financial hardships. Inspite of everything she managed to create a way of life that permitted a continued spiritual devotion.

She confronted her confessor and prayed intensely as to know what was God's will for her. Becoming more humble and prepared, she was ever more attentive to what He asked her in the depths of her heart, and also through the happenings and needs of the poor of her city.

Whilst she was still with the Canosians and had the premonition of her mother's death, Gaetana had also sensed that He was preparing her for the Recovery "to employ there all of herself in the service of the poor and thus fulfill His will." She held this vocation hidden in her heart for a long time before finding the courage to talk about it with her confessor, because it semed to her strange and terrible.

When at last she had told him, he seemed to give no weight to the idea. However whenever Gaetana saw a poor person "recovered", she refelt that invitation "I want you among my poor", and said "the idea of the Recovery follows me constantly". She was 26 years old when she was finally free from all obligations to her family and could at last do as she wished. Upon conclusion of a serious and shared discernment, it was a Gesuit, P. Bedin that confirmed to her, saying "yes Gaetana, the Lord wants you in the Recovery." In 1853, "only to do the will of God", Gaetana entered into the hospice for beggars, which held in miserable conditions 115 guests "the large part victims of unruliness and vice." in whom "disorders and abuses of almost every type".

She remained there for 36 years until her death and employed in this ministry all of herself with untiring charity. While watching over the beds of the dying, and in the most humble service of the ill and the old, she treated all with the abnegation, the delicacy and gentleness of those who in recoveries serve the Lord. She was driven by a great faith in God, from the desire to be His, and to please him in everything.When she was 33 years old, and with the consent of her confessor don Simonetti she took a vow of total devotion of herself to God, "ready to accept absolutely anything that the Lord might ask of her".

With unlimited faith she gave herself into the hands of God, "weak instrument which He uses for His own purposes". She attributed to providence the birth of the congregation, that came from the simplicity and humlity, with the profession of the first two companions in 1865. The name "Daughters of the Divine Will" suggested to the subconscious of Gaetana, and the young women that followed her indicated that which should define them "complete uniformity to the Divine Will through a total abandonment in God and a strong zeal for the well-being of one's neighbor, ready to sacrifice anything in order to make them well."

Like her, the first companions driven by the same spirit devoted themselves to the will of God, dedicating themselves to serve the poor in the Recovery and those in need, especially helping those who were ill at home, and other acts of charity depending on the particular needs that arose. The Vescovo of Vicenza approved the first rules of the congregation in 1875.

Gaetana died on the 26th of November 1889 lovingly assisted by her daughters and venerated by her fellow citizens. Her mortal remains are venerated in the Mother House. Since the beginning the communities have multiplied and today the congregation is diffused in Europe, America and Africa.

The path to holiness that Gaetana followed is, for it's essential nature a proposable itinerary for all christians; achieve in everything and always that which pleases the Lord, trusting oneself to Him in enlightened confidence, to change with only the force of love all evil into good in the manner of Jesus.