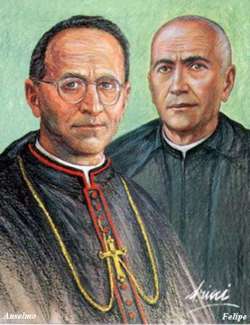 Felipe Ripoll Morata was born to a poor but highly religious family. He was a priest, Professor and spiritual director at the diocesan seminary, and later served as rector. When the Republican Army overran Teruel in 1938, Father Felipe stayed with his people, kept faith with his bishop, and refused to cooperate with anything he saw as being against Church interests. Imprisoned for thirteen months. Used as human shield by soldiers. Martyred in the persecutions of the Spanish Civil War.