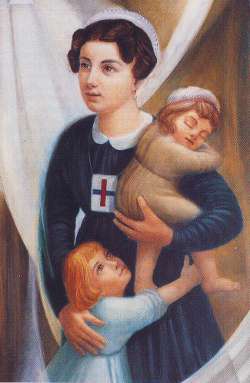 Elisabetta was born of noble and well-off family In the historical center of Rome, in via Tor dei Conti, not far from the Coliseum, on November 21, 1774. She was the daughter of Tommaso and Teresa Primoli. Her family was well off, of deep Christian convictions and diligent in the education of their children. At 21 years of age, on January 10 1796, Elisabetta married Cristoforo Mora, a young lawyer and son of Francesco Mora, a renowned doctor of the town.

A few months into the marriage, Cristoforo became jealous of his wife. He became controlling in a troublesome manner and also interfered with the visits of the relatives. Then, little by little, his feelings for Elisabetta began to change into resentment and indifference. In the first five years of the marriage, Elisabetta gave birth to four daughters, of whom two died and two survived, Marianna and Lucina.

During this time, Cristoforo, began an extramarital affair with a woman of modest conditions, to which he gave not only his love but also his time and his money. He deceived his wife, Elisabetta, and deserted his family, reducing it to destitution, and he squandered his family's fortune. His wife and the two daughters fell into extreme poverty.

To the physical and psychological violence of her husband, Elisabetta responded with absolute fidelity. In 1801 a mysterious illness brought her to death's door. She was cured in an inexplicable way and had her first mystical experience.

Elisabetta, to pay creditors and to safeguard the good name of her husband, was compelled to sell her jewelry and, even, her wedding garments. She continued to care for her daughters and the daily chores of the home with utmost care. She also dedicated much time to prayer, to the service of the poor and assisting the sick. She dedicated special care to families in need. She was ridiculed by Cristoforo for her "pious" behavior, but continued to pray for him.

Friends and even her confessor advised Elisabetta to separate, but Elisabetta never lost heart. For the sake of Christ, Elisabetta considered the salvation of her husband and of her daughters and used this misfortune for spiritual profit. Elisabetta was convinced that "nobody can be saved all alone, and the God has entrusted to everyone the responsibility of the salvation of others in order to carry out his project of love". This is the story of a woman betrayed, however, Elisabetta understood what it meant to be a Christian. She knew that God entrusted Cristoforo to her through the Sacrament of Marriage and that she had the responsibility to carry this cross to salvation. She could not leave it, because God had entrusted it.

Set afire from the love of God in the Holy Trinity, and supported by a strong intimate relationship with Jesus, her love for Cristoforo grew with more intensity every day. Elisabetta desired more and more be united to Cristoforo through God to help him reach his eternal destiny and salvation.

Elisabetta came to know and to understand profoundly the spirituality of the Trinitarians and joined the secular Third Order, responding with dedication to the vocation of the family and secular consecration.

The fame of her "holiness", the echo of her mystical experiences and of her "miraculous power" quickly spread throughout Rome and its surrounding neighborhoods. However, none of this changed her poor life style, marked by great humility and a generous spirit of service to the poor and those fallen away form God. She continually offered herself for the Pope, the Church, her city of Rome and the conversion of her husband.

And so, with her life of heroic faithfulness to God and her absolute dedication to the Sacrament of Marriage, Elisabetta died. On February 5 1825, on a cold and rainy night, while being cared for by her two daughters, Lucina and Marianna, she entered the light of the Holy Trinity as if in a sweet slumber. Cristoforo rushed to her death bed to utter these words: "Today we have lost a great bride and mother."

Elisabetta's wish had come true... for the seed of conversion was sprouthing in her husband's soul. In 1834, Cristoforo became a Conventual Franciscan and died as a priest of September 9, 1845 in the Franciscan church at Sezze, Italy.