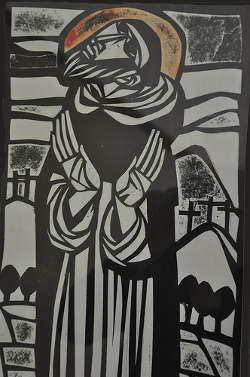 Saint Fr. Domingo Ibáńez de Erquicia was born in Régil, Guipuskoa, Spain. In 1605, he was professed in the Dominican Order and in 1611, he arrived in the Philippines where he zealously worked as missionary to Pangasinan and later as Professor of Theology at the Colegio de Santo Tomas.

In 1623, he departed for Japan when the persecution was most violent. During ten years he displayed heroic priestly dedication in the care of the Christians, comforting them, reconciling the apostates, administering the sacraments in painfully difficult circumstances. Constantly sought by the authorities, and desiring martyrdom, he was captured on July 1633 and interned in the prison of Nagoya. Taken to Nagasaki, and after refusing to renounce his faith, he was placed in the torment of gallows and the pit on August 13, 1633 and gave his soul to God the following day. Fr. Domingo Ibáńez de Erquicia with Lorenzo Ruiz was beatified in Manila on February 18, 1981 by Pope John Paul II who canonized him and Lorenzo on October 18, 1987. Lorenzo and Domingo's beatification was the first one outside the Vatican.

St. Domingo was aided in his missionary efforts by St. Francis Shoyemon, a Japanese layman who later was received into the Order of Preachers as a Dominican Cooperator Brother. St. Francis served as a catechist and translator, and when St. Domingo was imprisoned, St. Francis was with him. It was while they were in prison that St. Domingo received St. Francis into the Dominican Order as a cooperator brother. The two coworkers in the faith were martyred on the same day.