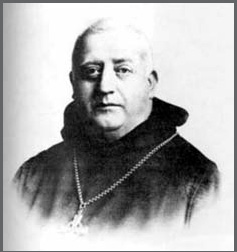 Blessed Columba Marmion, born Joseph Aloysius Marmion (April 1, 1858 - January 30, 1923) was an Irish monk, and the third abbot of Maredsous Abbey. Beatified by Pope John Paul II on September 3, 2000, Marmion was one of the most popular and influential Catholic writers of the 20th century. His books are considered spiritual classics.