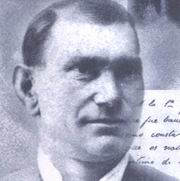 Ceferino Giménez Malla (also known as El Pelé, "the Strong One", or "the Brave One"; August 26, 1861 -- August 8, 1936) was a Spanish Gypsy, a Roman Catholic catechist and activist for Spanish Romani causes, considered the patron saint of Romani people in Roman Catholicism. A victim of the Spanish Republican militias during the Civil War, Ceferino Giménez Malla was beatified on May 4, 1997; May 4 is also his feast day.