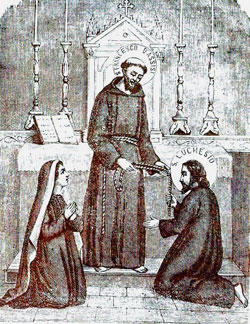 The Val d'Elsa, then Florentine territory, was the birthplace of Luchesio, or Lucius, the first Franciscan tertiary. As a young man he was wholly engrossed in worldly interests, especially politics and money making. So unpopular did he make himself by his violent partisanship of the Guelf cause, that he found it advisable to leave Gaggiano, his native place, and to settle in Poggibonsi, where he carried on business as a provision merchant and money lender. Then, when he was between thirty and forty, a change came over him, partly perhaps as the result of the death of his children. His heart was touched by divine grace and he began to take interest in works of mercy, such as nursing the sick and visiting the prisons. He even gave away to the poor, all his possessions, except a piece of land which he determined to cultivate himself. Soon afterwards St. Francis of Assisi came to Poggibonsi. He had for some time contemplated the necessity of forming an association for persons desiring to live the religious life in the world, but Luchesio and his wife Bonadonna were actually, it is said, the first man and woman to receive from the seraphic father, the habit and cord of the Third Order. From that moment they gave themselves up to a penitential and charitable life. Sometimes Luchesio would give away every scrap of food that was in the house, and at first, Bonadonna would demur, for she did not at once rise to such perfect trust in divine Providence: but experience taught her that God supplies His faithful children with their daily bread. Her husband attained to great sanctity, and was rewarded by ecstacies and the gift of healing. When it became evident that he had not long to live, his wife begged him to wait a little for her, so that she who had shared his sufferings here, might participate in his happiness above. Her wish was granted, and she died shortly before her husband passed to his reward. Blessed Luchesio's cultus was confirmed in 1694. His feast day is April 28th.