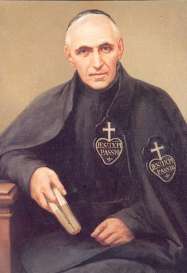 Bernardo Maria Silvestrelli studied ain Rome. After the death of his parents he entered the Passionist novitiate but was interrupted because of poor health, and in 1856 he was ordained a priest. He helped the sick during the cholera epidemic. In 1856, he was taken back to the novitiate. He was superior of the house at the Scala Santa in Rome, he was elected Provincial of the Italian provinces in 1878 the Superior General Assembly.