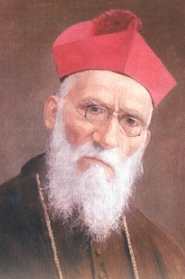 Giacinto Longhin was born in 1863 by Matthew and Judith Marin, to farmers and baptized with the names of Giacinto Bonaventure. In 1879 he entered the novitiate of the Capuchin Order under the name "Brother Andrew of Camposampiero." On June 19, 1886, at just 23, Giacinto was ordained a priest. For years he was a teacher and "spiritual leader" of the young religious. In 1902 he was appointed "minister" of the Venetian province of the Order based in Venice, where he met Cardinal Giuseppe Sarto, the future Pope Pius X.

On April 13, 1904 Pius X appointed him Bishop of Treviso. He lived through years of social and political struggle between secularists and Catholics.

On October 3, 1935 in Salzano, at the end of the pastoral visit, suddenly lost his sight. Rushed to the hospital in Treviso, he was paralyized. His death occurred on June 26, 1936.