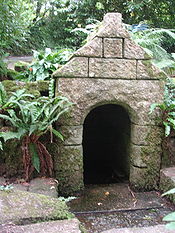 St. Keyne (Keyna or Cain) was one of the twenty-four children of King Brychan of Brecknock, Wales. She refused several suitors' offers of marriage and became a hermitess on the banks of the Severn River in Somersetshire, England. After living there for several years, during which she traveled widely, she was persuaded by her nephew, St. Cadoc, to return to Wales, though exactly where she spent her last days is not known. During her travels, she founded numerous churches in South Wales, Cornwall, and perhaps somerset. Her feast day is October 8.