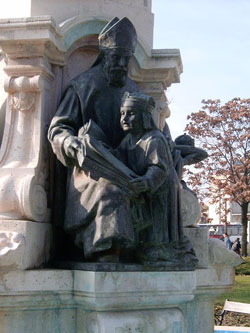 was an Italian bishop from Venice (some claim Basque origins) who operated in the Kingdom of Hungary (specifically in Budapest), and educated Saint Emeric of Hungary, the son of Saint Stephen of Hungary). He played a major role in converting Hungary to Christianity. He was the bishop of Csanád.

Gellért's martyrdom took place on 24 September 1046 (his co-martyrs were Bystrik and Buldus) on a hill in Budapest which is now named after him. Allegedly he was placed on a 2-wheel cart, hauled to the hilltop and rolled down the now named Gellert Hill, then as still being alive at the bottom, beaten to death. Other unverified tales report him as being put in a spiked barrel for rolling down.

Canonized in 1083, along with St. Stephen and St. Emeric, Gellért is currently one of the patron saints of Hungary.