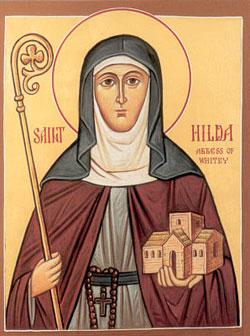 Benedictine abbess, baptized by St. Paulinus. She was the daughter of a king of Northumbria, England, and is considered one of England's greatest women. At age thirty three Hilda entered Chelles Monastery in France, where her sister was a nun. At the request of St. Aidan, she returned to Northumbria and became abbess of Hartlepool. In time she became the head of the double monastery of Streaneschalch, at Whitby. She trained five bishops, convened the Council of Whitby, and encouraged the poet Caedmon.