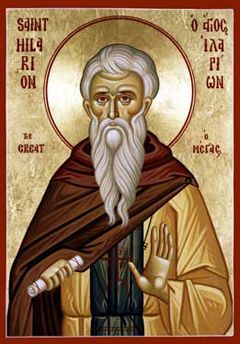 Abbot and disciple of St. Anthony the Great, companion of St. Hesychius. He was born in Tabatha, Palestine, and was educated in Alexandria, Egypt. He stayed with St. Anthony in the desert there before becoming a hermit at Majuma, near Gaza, Israel. In 356, Hilarion returned to St. Anthony in the Egyptian desert and found that his fame had Spread there too. He fled to Sicily to escape notice, but Hesychius traced him there. The two went to Dalmatia, Croatia, and then to Cyprus. Hilarion performed so many miracles that crowds flocked to him when it was discovered he was in any region. He died on Cyprus, and St. Hesychius secretly took his remains back to Palestine. His cult is now confined to local calendars.