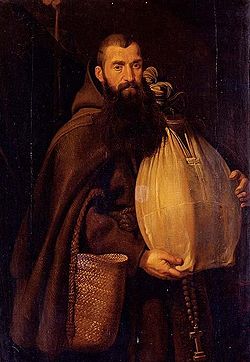 Felix of Cantalice was born of peasant parents at Cantalice, Apulia, Italy. He was a shepherd and a farm laborer in his youth, became a Capuchin lay brother at nearby Citta Ducale Monastery in Anticoli, and became noted for his austerities and piety. He was sent to Rome in 1549 and spent the next thirty-eight years in the monastery there as questor, aiding the sick and the poor and revered by all. He was a friend of St. Philip Neri and helped in St. Charles Borromeo's revision of the rule for his Oblates. Felix was canonized in 1709. His feast day is May 18th.