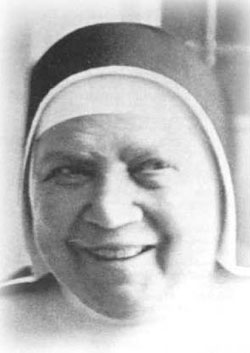 Hi readers, it seems you use Catholic Online a lot; that's great! It's a little awkward to ask, but we need your help. If you have already donated, we sincerely thank you. We're not salespeople, but we depend on donations averaging $14.76 and fewer than 1% of readers give. If you donate just $5.00, the price of your coffee, Catholic Online School could keep thriving. Thank you. Help Now >
As the oldest of eight children, Antonina de Angelis, of San Gregorio, Italy, worked in the fields, manifesting the virtues of modesty and simplicity. At the age of twenty-four, she undertook the fulfillment of her childhood aspiration of becoming a nun by entering the Institute of the Daughters of Our Lady of Mercy. Antonina took the religious name, Maria Ludovica. In 1907, she was sent by her congregation to Buenos Aires, Argentina to serve in a children's hospital, beginning her labors there in the lowly station of hospital cook. She was subsequently chosen to become superior of her convent in Buenos Aires. Mother Maria Ludovica spent the rest of her life in Argentina, serving invalids according to her maxim, "To do good to all, no matter whom." She died on February 25, 1962.