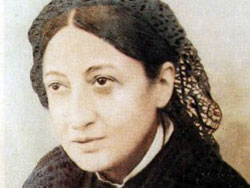 As a teenager of Naples, Italy, Caterina Volpicelli was preoccupied with attending plays and ballets. But at the age of fifteen, she providentially met (Blessed) Father Ludovico da Casoria, who taught her to make devotion to the Sacred Heart of Jesus the one aim of her life. Under his guidance, she became a Third Order Franciscan. He advised her to use her social contacts to serve Christ as a "fisher of souls." At the age of twenty, Caterina entered the Congregation of Perpetual Adorers of the Blessed Sacrament, but her poor health soon forced her to leave. Nonetheless, she remained deeply devoted to the Eucharist, spending hour upon hour in adoration before the tabernacle. Having learned from her confessor about the French Sacred Heart apostolate known as the Apostleship of Prayer, Caterina discovered in this association what she needed for her spiritual life. It led her to found a new congregation, the Servants of the Sacred Heart, in fulfillment of her aspiration "to revive love for Jesus Christ in hearts, in families, and in society." She died on December 28, 1894.