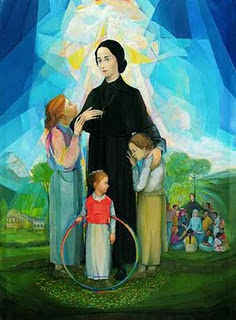 At the age of six, Caterina Cittadini, of Bergamo, Italy, was taken into an orphanage together with her younger sister Giuditta after losing her mother and being abandoned by her father. Here she developed a deep spiritual life marked by devotion to the Blessed Virgin Mary, to her guardian angel, and to her patron saint. At the age of twenty-one, having earned a teaching diploma, Caterina left the orphanage. Thereafter, she and her sister settled in the village of Somasca, where they began a Catholic girls' school and actively participated in the liturgical life, religious instruction, and confraternities of the parish church. Caterina expanded her labors to educate orphans and girls from other villages. The students in turn disseminated the religious and moral principles that Caterina had instilled in them. In 1840 Caterina suffered the sudden loss of her beloved sister, who had so closely collaborated with her. It was shortly after Caterina's own death in 1857 that her petitions for the transformation of her educational institute into a religious congregation were granted with the formal recognition of the Ursuline Sisters of Somasca.

4 1/2" St. Elizabeth of Hungary Pewter Statue on Base