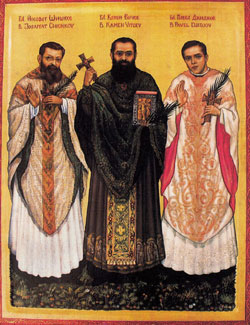 Joseph Djidjov, of Plovdiv, Bulgaria, entered the Assumptionist congregation at the age of nineteen, taking the religious name Pavel, and becoming a Roman rite priest six years later. Having earlier been a student at the College of Saint Augustine in Plovdiv, he returned to this school to serve under his fellow Assumptionist, (Blessed) Father Kamen Vitchev. Following the closing of the college by the Communists in 1948, Father Djidjov continued his apostolate to students in Varna. His scarcely concealed anti-Communist sentiments made him a target of Communist secret police surveillance. Learning of the arrests of fellow priests, Father Djidjov observed, "May God's will be done. We await our turn." On July 4, 1952, he and Father Kamen Vitchev were both arrested. In October, the two Assumptionists and a third priest of their congregation, (Blessed) Josaphat Chichov, were sentenced to death on the false charge of directing "a secret service agency of the Pope." They were executed by firing squad on November 11, 1952.
Continue reading about Bl. Pavel Djidjov