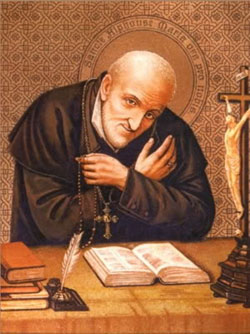 At the age of thirty, Anthony Baldinucci, of Florence, Italy, was ordained a Jesuit priest. Two years later, he undertook the apostolate of giving parish missions in central Italy. On his way to each parish, he would always walk barefoot as a penance with the intent "that God may be moved by my sufferings to touch the hearts of my hearers," as he once explained. During these missions, he allotted all his time to preaching, hearing confessions, catechizing children, visiting the sick, and continuing his own prayer life. Father Baldinucci was deeply devoted to the Eucharist, the Passion of Christ, and the Blessed Virgin Mary. He highly revered an image of the Blessed Virgin with the title, "Refuge of Sinners," attributing numerous conversions and miraculous cures to its veneration. When in 1717 Father Baldinucci fell ill with his final illness, he asked to be placed in his room this image of Mary, before which he repeatedly prayed, "Show yourself to be a Mother." As his end neared, he gazed sometimes heavenward, sometimes toward the picture, uttering the aspiration, "Jesus and Mary, my hope."
Continue reading about Bl. Anthony Baldinucci