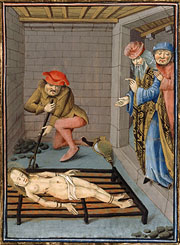 The maiden named Faith (in Latin, Fides), one of the virgin martyrs to suffer under the ancient Roman persecutions, was a very popular saint in medieval Europe, with miracles reported at her shrine in Conques, France. She is believed to have suffered martyrdom at Agen, Gaul (France) in the third century, but the specifics of her death are available only from much later texts of dubious historical validity. Nonetheless, these texts may contain at least some authentic details of her martyrdom. Upon being summoned before a Roman procurator, Faith is said to have fortified herself by making the sign of the cross. She told the judge, "I have served Christ from my infancy, and to him I have consecrated myself." When threatened with death for refusing to sacrifice to the pagan gods, she answered, "I am prepared to suffer everything for Christ. I long to die for him." As she was being burned to death on a red-hot grill, heavy snow is said to have so filled the air round about her that it modestly veiled her body from the onlookers until she had died.
Continue reading about St. Faith