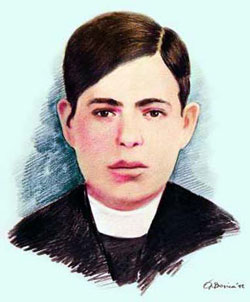 As a boy, Atilano Cruz Alvarado, of Ahuetita de Abajo, Mexico, tended cattle. At the age of seventeen, he began studying for the priesthood. He was ordained in July of 1927. Father Cruz thus began his priestly ministry at a time when the Mexican government's persecution of the Catholic Church was in its most violent phase. Only a few months after his ordination, he was assigned to replace another parish priest shot to death by soldiers (Saint Toribio Romo Gonzalez). On June 29, 1928, Father Cruz went to join his pastor, (Saint) Justino Orona Madrigal (see July 2), at a nearby ranch, where they prayed and discussed the situation in their parish. As government troops raided the ranch at dawn on July 1, Father Cruz heard the soldiers gunning down Father Orona. Thereupon Father Cruz knelt in prayer to await the troops. Upon finding him, the soldiers executed him.
Continue reading about St. Atilano Cruz Alvarado