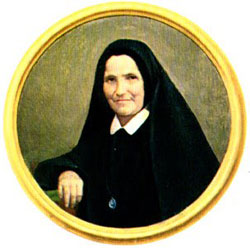 Orphaned at the age of seven, Asteria Annunciata Cocchetti, of Rovato, Italy, was raised by her pious grandmother. At the age of seventeen, she opened in her grandmother's home a school for needy girls. When six years later her grandmother died, Annunciata had to leave her native village and the school she had founded to live with her uncle in Milan. Having repeatedly attended parish missions that instilled in her a zeal for holiness and the salvation of souls, Annunciata at the age of thirty-one accepted a teaching position at a Catholic girls' school in Cemmo, with the encouragement of her spiritual director. Seeing her life-long vocation in this assignment, Annunciata subsequently founded a religious congregation dedicated to the education of girls, the Sisters of Saint Dorothy of Cemmo. She and her congregation also regularly hosted retreats for young women according to the "Spiritual Exercises" of Saint Ignatius of Loyola. Mother Annunciata advised the sisters under her, "Become saints by doing good to the girls entrusted to you."