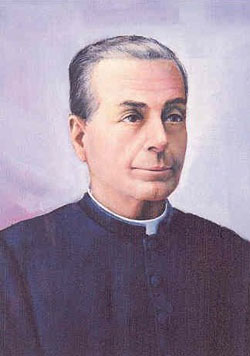 Having aspired to the priesthood from his youth, Juan Zegri y Moreno, of Granada, Spain, was ordained a priest at the age of twenty-three. Serving as a parish priest, he manifested a profound love for the Eucharist and a deep devotion to the Blessed Virgin Mary. In a homily he revealed his understanding of his priestly vocation as requiring him to be a father to those who were suffering, as well as "a good shepherd, going after the lost sheep," and "a doctor, healing sick hearts wounded by faults and binding them with hope." Zealous for the plight of the poor, Father Zegri founded a congregation of women religious to assist the poor both spiritually and materially, the Sisters of Charity of the Blessed Virgin Mary of Mercy. Sadly, within a few years of the birth of the congregation, the sisters turned against Father Zegri, falsely denouncing him. For years afterward, Father Zegri suffered in silence until he was exonerated of the calumnies leveled against him, with his innocence confirmed by an 1894 decree of the Holy See. He died on March 17, 1905.