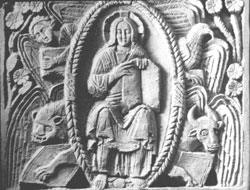 Angilbert, a courtier of the emperor Charlemagne charged with the duty of defending the French coast from Danish invaders, faced the challenge of stopping a fleet of Danes attacking along the Somme River. Before going to battle, he went to pray at the tomb of the abbot Saint Riquier, vowing to become a monk if his army was victorious. In answer to his prayers, there arose a severe thunderstorm with so much lightning, hail, and rain that it dispersed the Danes, leading to their defeat. Angilbert entered the monastery of Centula (Saint-Riquier), later becoming its abbot. Having observed in his own monastic life a rigorous schedule of prayers and psalms throughout the day and night, he introduced in his abbey the practice of "laus perennis," the perpetual recitation of the Psalms, twenty-four hours a day, by relays of monks. A charter issued by Angilbert for the restoration of his monastery provides a fascinating list of relics enshrined by him, including a portion of a candle said to have been used by Mary and Joseph in the manger of Bethlehem. One hundred sixty years after Angilbert's death, his body was found to be incorrupt.
Continue reading about St. Angilbert