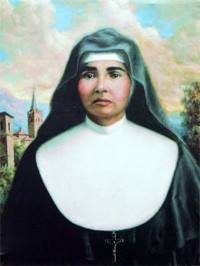 As a lay assistant to the Daughters of Mary, Help of Christians, Eusebia Palomino Yenes, of Cantalpino, Spain, longed to become a nun herself, but kept this aspiration a secret, fearing that her poverty and lack of schooling would preclude her admission. Yet she told herself, "If I carry out well my duties here, for love of the Blessed Virgin, one day I will be her daughter in the congregation." Eventually a superior learned of Eusebia's secret hope and, assuring the girl that she would be welcomed, admitted her to the novitiate. After taking her vows, Sister Eusebia was assigned to school-teaching at a convent in Valverde del Camino. Initially the children scorned and mocked her. But gradually she won them over, captivating them with her engaging accounts of the lives of the saints. In the early 1930s, as anti-Catholic forces in Spain were increasingly menacing the Church, Sister Eusebia offered herself to God as a victim soul for the salvation of her country. Her offering was evidently accepted when in 1932 a medically inexplicable illness came upon her, contracting her limbs. She died on February 10, 1935.