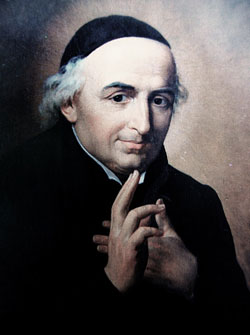 Francis Xavier Bianchi, of Arpino, Italy, suffered much in striving to overcome his father's opposition to his religious vocation. Having been ordained a Barnabite priest at the age of twenty-four, Father Bianchi spent hour upon hour in the confessional, sustained by a deep prayer life. His personal resolve to make himself always and everywhere available to anyone seeking his priestly ministry and counsel seemed to impart to his words and prayers an extraordinary efficacy. Later in life, Father Bianchi was crippled by the swelling and ulceration of both his legs, rendering him incapable of moving about or even standing on his own. He nonetheless managed to continue celebrating Mass. When in 1805 a lava flow from the erupting Mount Vesuvius threatened Naples, he had himself carried to the advancing edge of the lava, where with a blessing he halted it. Although bedridden, Father Bianchi continued to counsel those who came to him. Three days before his death, he experienced a vision of his deceased penitent, Saint Mary Frances of Naples, who before her own death in 1791 had promised to appear to him thus.
Continue reading about St. Francis Xavier Bianchi