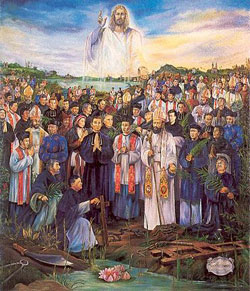 While serving as an army corporal, Francis Trung Van Tran, of Phan-Xa, Vietnam, was imprisoned after being accused of cheating during a scholastic exam. When subsequently the Vietnamese emperor Tu Duc granted a general amnesty to prisoners, all were ordered to trample upon a cross in renunciation of Christianity if they wanted to be set free. Having converted to the Catholic faith, Francis refused to comply with this command. When questioned about this, he admitted to being a Christian, adding, "Never will I desert my religion." He was thereafter beaten repeatedly and sentenced to death for his faith. When two mandarins of the imperial court petitioned Tu Duc to pardon the condemned man, the emperor not only refused their request, but he also ordered the mandarins themselves to be punished for trying to save the prisoner. At his execution, Francis asked for a bit of limestone paste, which he then used to draw a cross upon the back of his neck. He was put to death by beheading.