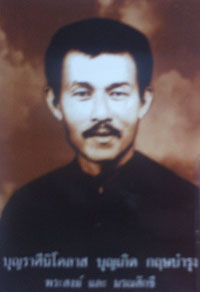 Nicholas Bunkerd Kitbamrung, of the Nakhon Chaisri district, Thailand, was ordained a priest at the age of thirty-one. While serving as a parish priest, he assisted the religious of the Salesian Order following their arrival in Thailand in 1927, teaching the priests his native tongue and training the seminarians in catechesis. Father Nicholas later labored in northern Thailand and elsewhere in the country to win the conversions of lapsed Catholics. He carried out his ministry under the shadow of an anti-Christian Thai government, which considered Catholics "unpatriotic." On the morning of January 12, 1941, Father Nicholas rang the church bell to summon parishioners to Sunday Mass. For this simple act he was arrested and sentenced to fifteen years of imprisonment. While in prison, Father Nicholas catechized his fellow prisoners, baptizing 68 of them. Unable to say his breviary, he found his consolation in reciting the rosary. Harshly treated, he soon contracted tuberculosis, and was then left to die in a hospital, denied care because he was a Catholic. He died on January 12, 1944.