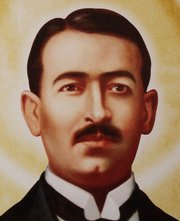 Leonardo P√©rez Larios was born on 28 November 1883 in Lagos di Moreno, Jalisco, Mexico. He never married and although he desired to become a priest, he was unable to do so because of his responsibility to care for his two sisters and maintain the family. A deeply religious man, Leonardo belonged to a Marian group whose members made a vow of chastity and met each week for Eucharistic adoration. Leonardo was also arrested in the home of the Alba sisters, after having participated in Holy Mass and a Holy Hour organized by Fr Sol√°. When soldiers entered the home and discovered Fr Sol√°, they mistook Leonardo for a priest because he was dressed in black and was very devout. He declared that he was not a priest, but that he was Roman Catholic. Leonardo was taken away to be martyred in Rancho de San Joaqu√≠n on 25 April 1927, together with Fr Rangel and Fr Sol√° y Molist.