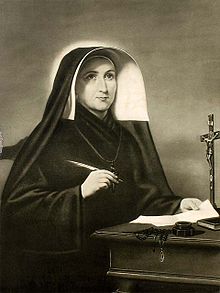 1773-1838 foundress. Born in the Chateau des Anges, near LeBlanc, France (her father was lord of the manor), she was sent at ten to a convent at Poitiers. On the death of her father in 1792 she met St. Andrew Fournet who was trying to reestablish his parish church at Maille and under his guidance she devoted herself to teaching and caring for the sick and needy. After her mother died in 1804 she joined the Carmelites at Poitiers; eight months later, the Society of Providence; in 1806 with four assistants who had been formed into a community by Abbe Fournet she moved into Chateau de Molante near Maille and the Daughters of the Cross also called the Sisters of St. Andrew came into being. The congregation received diocesan approval in 1816 and spread rapidly. In Igon in the Basque country she met Fr. Michael Garicoits spiritual adviser of the house there and encouraged him in founding the Priests of the Sacred Heart of Betharram. She was canonized in 1947. Her feastday is August 26.