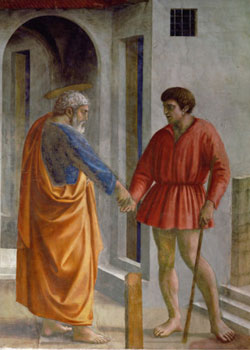 The life of Peter, a North African tax collector and banker, bears an uncanny resemblance to that of Charles Dickens' fictional character, Ebenezer Scrooge. Peter was a merciless miser, cruel to the poor, who dubbed him "the stingy one." Once when a baker was delivering bread to Peter at his door, a pauper resolute to obtain alms rushed to the doorstep. Out of anger, and to rid himself of the intruder, Peter threw a loaf at the head of the poor man, who received it with delight. Two days later, Peter fell gravely ill. During this sickness he experienced a terrifying vision of the divine judgment he would face if he did not repent. He saw a balancing scale, on one pan of which a hoard of devils piled his many sins. On the other side were angels that had nothing to place on the opposite pan other than the one loaf Peter had angrily hurled at the pauper. The vision wrought a total conversion in Peter. Thereafter he donated all his possessions to the poor. After giving his own tunic to a pauper, Peter experienced a vision of Christ clothed in the same garment. Peter also obtained the miraculous healing of a deaf and mute man.