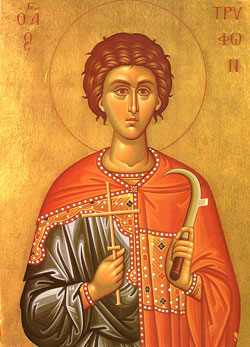 Martyred Christian gardener who lived at Sinope, in Paphiagonia, on the Black Sea and was put to death during the persecutions launched by Emperor Diocletian. Phocas is sometimes confused with Phocas of Antioch, although there is no doubt about the historical act of his martyrdom. According to tradition, he gave welcome to the Roman soldiers sent to find and execute him and, as they did not know who he was, he agreed to take them to the Phocas whom they sought. After fixing them food and allowing them to sleep in his house, he went out and dug his grave, using the rest of the night to prepare his soul. In the morning he led them to his prepared grave and informed them of his identity. When they were aghast and hesitated to slay him, he encouraged them to complete their task and behead him. He is especially venerated in the East and was long considered a patron saint for sailors.

ST. PHOCUS dwelt near the gate of Sinope, a city of Pontus, and lived by cultivating a garden, which yielded him a handsome subsistence, and wherewith plentifully to relieve the indigent. In his humble profession he imitated the virtue of the most holy anchorets, and seemed in part restored to the happy condition of our first parents in Eden. To prune the garden without labour and toil was their sweet employment and pleasure. Since their sin, the earth yields not its fruit but by the sweat of our brow. But still, no labour is more useful or necessary, or more natural to man, and better adapted to maintain in him vigour of mind or health of body than that of tillage; nor does any other part of the universe rival the innocent charms which a garden presents to all our senses, by the fragrancy of its flowers, by the riches of its produce, and the sweetness and variety of its fruits; by the melodious concert of its musicians, by the worlds of wonders which every stem, leaf, and fibre exhibit to the contemplation of the inquisitive philosopher, and by that beauty and variegated lustre of colours which clothe the numberless tribes of its smallest inhabitants, and adorn its shining landscapes, vying with the brightest splendour of the heavens, and in a single lily surpassing the dazzling lustre with which Solomon was surrounded on his throne in the midst of all his glory. And what a field for contemplation does a garden offer to our view in every part, raising our souls to God in raptures of love and praise, stimulating us to fervour, by the fruitfulness with which it repays our labour, and multiplies the seed it receives; and exciting us to tears of compunction for our insensibility to God by the barrenness with which it is changed into a frightful desert, unless subdued by assiduous toil! Our saint joining prayer with his labour, found in his garden itself an instructive book, and an inexhausted fund of holy meditation. His house was open to all strangers and travellers who had no lodging in the place; and after having for many years most liberally bestowed the fruit of his labour on the poor, he was found worthy also to give his life for Christ. Though his profession was obscure, he was well known over the whole country by the reputation of his charity and virtue.

When a cruel persecution, probably that of Dioclesian in 303, was suddenly raised in the church, Phocas was immediately impeached as a Christian, and such was the notoriety of his pretended crime, that the formality of a trial was superceded by the persecutors, and executioners were despatched with an order to kill him on the spot wherever they should find him. Arriving near Sinope, they would not enter the town, but stopping at his house without knowing it, at his kind invitation they took up their lodging with him. Being charmed with his courteous entertainment, they at supper disclosed to him the errand upon which they were sent, and desired him to inform them where this Phocas could be most easily met with? The servant of God, without the least surprise, told them he was well acquainted with the man, and would give them certain intelligence of him next morning. After they were retired to bed he dug a grave, prepared everything for his burial, and spent the night in disposing his soul for his last hour. When it was day he went to his guests, and told them Phocas was found, and in their power whenever they pleased to apprehend him. Glad at this news, they inquired where he was. "He is here present," said the martyr, "I myself am the man." Struck at his undaunted resolution, and at the composure of his mind, they stood a considerable time as if they had been motionless, nor could they at first think of imbruing their hands in the blood of a person in whom they discovered so heroic a virtue, and by whom they had been so courteously entertained. He indirectly encouraged them, saying, that as for himself, he looked upon such a death as the greatest of favours, and his highest advantage. At length recovering themselves from their surprise, they struck off his head. The Christians of that city, after peace was restored to the church, built a stately church which bore his name, and was famous over all the East. In it were deposited the sacred relics, though some portions of them were dispersed in other churches.

St. Asterius, bishop of Amasea about the year 400, pronounced the panegyric of this martyr, on his festival, in a church, probably near Amasea, which possessed a small part of his remains. In this discourse 1 he says, "that Phocas from the time of his death was become a pillar and support of the churches on earth: he draws all men to his house; the highways are filled with persons resorting from every country to this place of prayer. The magnificent church which (at Sinope) is possessed of his body, is the comfort and ease of the afflicted, the health of the sick, the magazine plentifully supplying the wants of the poor. If in any other place, as in this, some small portion of his relics be found, it also becomes admirable, and most desired by all Christians." He adds, that the head of St. Phocas was kept in his beautiful church in Rome, and says, "The Romans honour him by the concourse of the whole people in the same manner they do Peter and Paul." He bears testimony that the sailors in the Euxine, Ćgean, and Adriatic seas, and in the ocean, sing hymns in his honour, and that the martyr has often succoured and preserved them; and that the portion of gain which they in every voyage set apart for the poor is called Phocas's part. He mentions that a certain king of barbarians had sent his royal diadem set with jewels, and his rich helmet a present to the church of St. Phocas, praying the martyr to offer it to the Lord in thanksgiving for the kingdom which his Divine Majesty had bestowed upon him. St. Chrysostom received a portion of the relics of St. Phocas, not at Antioch, as Baronius thought, and as Fronto le Duc and Baillet doubt, but at Constantinople as Montfaucon demonstrates. 2 On that solemn occasion the city kept a great festival two days, and St. Chrysostom preached two sermons, only one of which is extant. 3 In this he says, that the emperors left their palaces to reverence these relics, and strove to share with the rest in the blessings which they procure men. The emperor Phocas built afterwards another great church at Constantinople in honour of this martyr, and caused a considerable part of his relics to be translated thither. The Greeks often style St. Phocas hiero-martyr or sacred martyr, which epithet they sometimes give to eminent martyrs who were not bishops, as Ruinart demonstrates against Baronius.