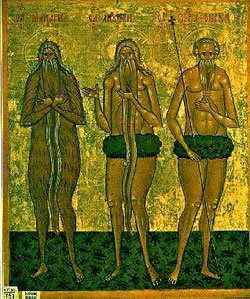 The first hermit to reside upon the famed Mount Athos in northern Greece. Peter is known almost entirely through legend, according to which he was originally a soldier who was captured by the Muslims and imprisoned until released through the intervention of St. Simeon. He then went to Rome and supposedly was granted the monastic habit by the pope himself. Graced with a vision from Our Lady, he journeyed to Mount Athos and took up the life of a hermit, remaining there for half a century. He reputedly overcame severe trials and temptations, including assaults by the devil. He is considered the first hermit to reside upon Mount Athos, sparking the tradition which culminated in the foundation of the great monasteries upon that Holy Mountain.