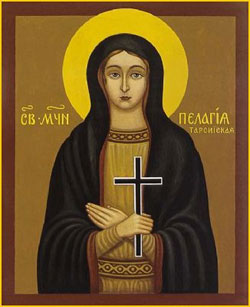 Most likely a legendary saint. According to tradition, she was a maiden of Tarsus, in Cilicia, the daughter of noble parents who arranged a marriage between her and a son of Emperor Diocletian. To delay the wedding, she went on a trip and, during the journey was baptized by one Bishop Clino. After returning, her fiance discovered her devotion to Christianity and killed himself from the shame. Pelagia was swiftly denounced to Diocletian by her mother. The emperor, who supposedly desired her for himself or another son, was willing to spare her if they wed and she renounced the faith. When she stood firm, Diocletian ordered Pelagia to be roasted to death. She is most likely based on the historical Pelagia of Antioch.