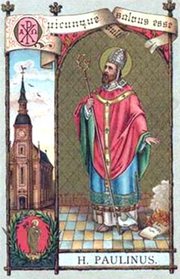 Bishop of Trier and an enemy of the Arian heresy. Originally from Gascony, he was educated in the cathedral school and became a follower of St. Maximinus whom he accompanied to Trier. He succeeded Maximinus as bishop of Trier in 349. A friend and supporter of St. Athanasius, he first met the saint when the bishop of Alexandria was exiled by the Arians to Trier. Paulinus passionately defended Athanasius at the Synod of Arles in 353. Two years later, because of his unflinching opposition to Arianism, Paulinus himself was exiled by Emperor Constantius II to Phrygia, where he died.